This rustic pendant inscribed with the Elder Futhark runes is inspired by Viking necklaces. It makes a wonderful gift for a loved one.

The Germanic people, including the Norse Vikings, had developed a written alphabet as early as A.D. 100. These runes were eventually used by the Norse, Anglo-Saxons, and Germans.

“The Elder Futhark (or Fuþark), also known as the Older Futhark, Old Futhark, or Germanic Futhark, is the oldest form of the runic alphabets. It was a writing system used by Germanic peoples for Northwest Germanic dialects in the Migration Period. Inscriptions are found on artifacts including jewelry, amulets, plateware, tools, and weapons, as well as runestones in Scandinavia, from the 2nd to the 10th centuries.” [Wikipedia]

Find out more about the Elder Futhark symbols here.

“Runes were carved on stone, bone, antler, wood and metal. Runestones were big rocks covered with inscriptions of runes usually in memory of a great man or woman. Over 3,000 runestones are located in Scandinavia. Runic inscriptions are found on grave markers, cenotaphs and memorials more often than on any other object. However, runic inscriptions are also found on:

“Runes had been thought to be predominantly used for runestones and for other memorial or religious purposes. However, an important excavation in Bergen, Norway in the 1950s revealed that runes were often used for business and everyday uses as well. Runic inscriptions expressing prayers, love letters, jokes and gags and personal messages were found in quantity there.” [Source: History on the Net]

There are no reviews yet. 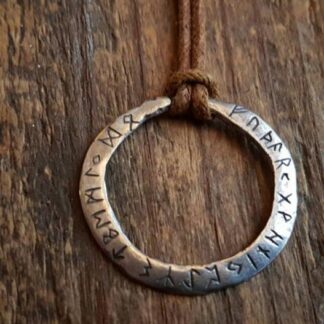