modname=ckeditor
Uses:
Malachite, ground to a powder, has been used for thousands of years to create beautiful pigments in every shade of green. Use it to paint with, or to color handmade candles and soaps.
Recipe for Malachite Natural Pigment, from Lilian May Studio –
20g (0.7 oz) powdered malachite
20 drops of Gum Arabic
4 drops of Photoflow ( a wetting agent made by Kodak)
4 drop of Clove oil
2 tsp Glycerine
1 tsp Honey
Mix together well.
History of Malachite as a Pigment
Perhaps the oldest known green pigment, malachite can be found in Egyptian tomb paintings. It was frequently used in Japanese and Chinese paintings from the 7th century onwards. In European paintings it seems to have been of importance mainly in the 15th and 16th centuries. Giovanni Bellini used it in his painting “The Agony in the Garden” and Pier della Francesca used it in “Baptism of Christ”. The pigment had a revival in the 19th century when Impressionists such as Pierre-Auguste Renoir used it.
What is Malachite?

Malachite is a beautiful gemstone. It is  prized for its striking green color ranging from pale green to bright emerald to dark green. The actual gems are found along the surfaces of underground caves as clusters of stalactites.  All malachite is rather soft, with a Moh’s hardness between 3.5 and 4.0.

Malachite was first discovered over 4000 years ago when it was mined and exploited across Israel and Egypt to produce gemstones, pigments, and sculptures. It has been found in archaeological remains such as tombs and paintings, left by the ancient Egyptians, ancient Greeks, and ancient Romans. They used it for amulets and jewelry and would even grind it down to make a vibrantly green eyeshadow. Some of the green paints found at these ancient sites have Malachite pigments in them. Malachite has also been used to create small sculptures, easily recognizable by the vibrant green color.

Meanings of Malachite
“Healing” gemstones are quite common, and Malachite is one of them. Malachite has been integrated into amulets since the times of ancient Egyptians, ancient Greeks, and Romans. It was thought that Malachite amulets would protect against the evil eye. Long after, during the Middle Ages, Malachite was worn by children to protect them against black magic and Witchcraft. It was thought that Malachite possessed warning capabilities and if danger was nearby, the gemstone would break into pieces.

Today, some people claim that Malachite is calming and can help release negative emotions and conjure positive ones.

There are no reviews yet. 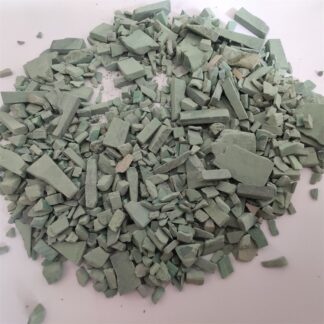